How a cult determined who became governor

How a cult determined who became governor

Some years ago, in a particular state in Nigeria, a dreaded cult group was very influential. The cult to a large extent determined who becomes the governor of the state.

There came a time when a chieftain of that cult decided to put his son forward for election as the governor of the state. But the cult chieftain was faced with a great challenge. A fellow member of the cult was also going for the position of a governor.

After much deliberation, the cult resolved to support their own member, irrespective of how high the father of the other candidate was in that same cult.

That son of a prominent member may have boasted that with his father in that cult, everything was settled. He never realized that there is a level above being a son to someone influential.

In the realm of the spirit, there is a limit to where a father’s influence can take you. Except you are initiated and properly involved, you will remain a second thought. You will not stand a chance against any contender who seats on the table.

It can even get critical to an extent where you as a child of a member will be used for ritual sacrifice.

This can also happen in Christianity. In Genesis 22:1-2, God requested Abraham to provide his only son as a sacrifice. His son, Isaac was not asked for an opinion. He was not even privy to the decision that was made concerning him.

“Sometime later, God tested Abraham’s faith. “Abraham!” God called. “Yes,” he replied. “Here I am.” “Take your son, your only son—yes, Isaac, whom you love so much—and go to the land of Moriah. Go and sacrifice him as a burnt offering on one of the mountains, which I will show you.”” 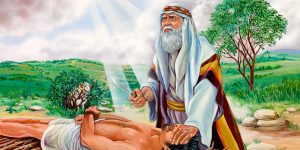 Isaac may have boasted many times to his friends that his father is close to God and has a conversational relationship with him. He may have even boasted that his father got him covered even when he sins. But he didn’t know that he could well be sacrificed to God without any recourse to him.

This is something many believers do not know about. That is why we have prayer contractors everywhere. People believe they can rely on another person to always stand the gap for them. We have spouses to pastors who think they are always covered even though they have no personal relationship with God. They live recklessly because they believe someone is praying for them. Some even go as far as cheating on their clergy spouse.

When God had a talk with Satan concerning Job, even though Job was not in that meeting, his life was protected by God because he seats at the table with God. But none of his children had a personal relationship with God and so, they were all treated as part of Jobs possessions. Meaning that the covering they had was only Job’s covering. 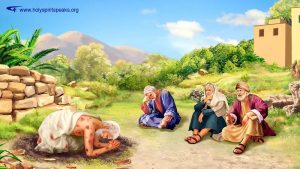 Job 1:4-5 “Job’s sons would take turns preparing feasts in their homes, and they would also invite their three sisters to celebrate with them. When these celebrations ended—sometimes after several days—Job would purify his children. He would get up early in the morning and offer a burnt offering for each of them. For Job said to himself, “Perhaps my children have sinned and have cursed God in their hearts.” This was Job’s regular practice.”

Job’s children were adults and were not living under his roof anymore. Yet he purified them after every party because he feared that they may have sinned against God. Job was their priest and rightly so. But he did not ensure that they were accountable to God personally. They remained his personal possessions even after they left his house to stay on their own.

Consequently, the court ruled that Satan should do anything he pleases with Job’s possessions and the children were wiped out.

People should stop thinking that they are covered by proxy.

Today, we see children of men of God, turning out to become criminals, cultists and prostitutes. It started with the mindset that they were covered by their father’s grace and therefore, no evil can befall them. Why there are some truths in such belief, there is a limitation. There is a caveat to it. The prodigal son went out of his father’s covering when he decided to live a life contrary to the father’s teachings.

Also, people do not know that as humans, a praying contractor could backslide or have trying times when he or she will not be able to pray for them. It’s like putting your hope on a doctor. What if that doctor become ill or clueless, like we saw during COVID-19?

Does it mean people cannot stand the gap for others? No. People can stand the gap for us in prayers. But it is never a substitute for a personal relationship. There are things people cannot do for us. Someone can pray for you to be healed. But it takes the Holy Spirit in you to keep you heal. Therefore, people get healed and later fall back to a worse state. The demon came back and saw that the place was empty.

A lot of Christian parents are not paying attention to this issue. Pastors should stop being prayer contractors

If you are a Christian and you do not yet have a personal relationship with God, your life is at risk. Even Jesus said “Come unto ME, ALL YE that labor…”   He said we should come to him. Not by proxy.

Having a personal relationship with God

How to ensure a chat with God daily

A passionate messenger of Personal Relationship with Jesus. I am a husband of one wife and a father of two children. You can drop a message below or send an email to editor@standardwords.com

Emi lo kan - the spiritual side of Nigerian politics

HAVING A PERSONAL RELATIONSHIP WITH GOD

No Result
View All Result